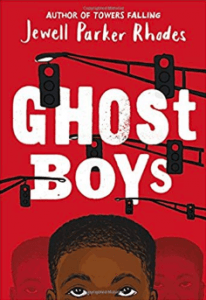 Ghost Boys, by award-winning author Jewell Parker Rhodes, captivated my attention from the very first page. It’s the kind of story that grips your heart until the very last page and haunts you once the book is closed. At least it did for me. I read Ghost Boys this past summer, think of it often, and have recommended it to many.

This book brings to light themes of racism and morality in a way that is both easy to understand and heart wrenching in its reality. While the story could be appropriate for mature 4th graders, it would be best for grades 5 and up.

As the Amazon review states:

“Only the living can make the world better. Live and make it better.

Twelve-year-old Jerome is shot by a police officer who mistakes his toy gun for a real threat. As a ghost, he observes the devastation that’s been unleashed on his family and community in the wake of what they see as an unjust and brutal killing.

Soon Jerome meets another ghost: Emmett Till, a boy from a very different time but similar circumstances. Emmett helps Jerome process what has happened, on a journey towards recognizing how historical racism may have led to the events that ended his life. Jerome also meets Sarah, the daughter of the police officer, who grapples with her father’s actions.

Once again Jewell Parker Rhodes deftly weaves historical and socio-political layers into a gripping and poignant story about how children and families face the complexities of today’s world, and how one boy grows to understand American blackness in the aftermath of his own death.”

The story goes back and forth between two times: when Jerome was alive and after he has died. It also seamlessly weaves together the stories of Jerome, the boy who was killed;  Emmett Till; and Sarah, the daughter of the police officer who shot Jerome. In ELA this story could be a mentor text for how to write a narrative from multiple perspectives.

In history classes, this would be the perfect introduction to the story of Emmett Till, what racism has looked like throughout history, and how the past influences and affects the future.

In addition to direct ties with curriculum, this would be a compelling read aloud and could open the lines of communication surrounding tough, but extremely relevant, topics.

Though short in length, the story is heavy. To give the story context and to further conversations, the following text set was created to pair with the novel.

If you’ve used “Ghost Boys” in your classroom, we’d love to hear about it! Drop us a comment and let us know!

Please prove that you are not a robot.

Powered by WordPress | Hosted by Edublogs | Protected by CloudFlare